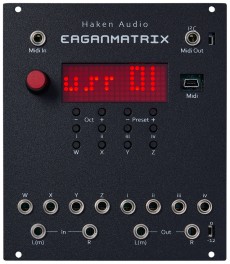 With the Haken Audio Eaganmatrix Module, the specially developed sound engine is now also available without a Continuum controller. The polyphonic Eurorack module can be controlled via MIDI or CV.

The technology of the Eaganmatrix Module corresponds to the sound generation of the Slim Continuum or Continuumini. The module has MIDI input and output (3.5 mm TRS) as well as USB, via which it can be played with its full polyphony of eight voices.

For analogue control, there are four CV inputs that address the playing parameters of a voice: Gate, Pitch, Timbre, Loudness. Here, the polyphony of the module is used to prevent notes from tearing off during long release times. These CV voltages can come from any source, such as a sequencer.

The four other CV inputs are used to control the sound parameters, which can differ from preset to preset. These affect all played voices simultaneously.