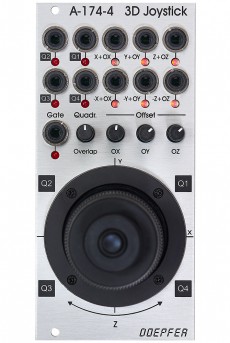 Each CV output is equipped with an LED that displays the present voltage.

Important note:
Because of the construction height of the joystick (about 7 cm) the module cannot be installed into the cases A-100P6, A-100P9, A-100PMS6, A-100PMS9 and A-100PMS12 during transportation as the depth of the case cover is not sufficient. Into the base cases A-100PB and A-100PMB as well as in all other cases without cover the module can be installed without problems. We are about to find a solution for this problem.